Elephant Action League and other 40 international non-governmental organizations sign letter to the European Union urging to suspend any export of raw ivory and to support a common EU position to this effect at the April 10th Committee meeting on Trade in Wild Fauna and Flora.

Tens of thousands of elephants are poached every year for their ivory to supply the Asian market. Most range states make tremendous efforts to protect live elephants. At the same time, ivory trade has expanded within the European Union, making the EU the largest exporter of so called preconvention ivory on the worldwide market.

The main destination of these increasing raw ivory exportations, driving demand and thus accelerating poaching, is China. Some EU Member States, including the United Kingdom, Germany, Sweden and France, have already decided to suspend the export of raw ivory. However, because of the common EU market, these welcome decisions will remain insufficient as long as they are not adopted in all other EU countries.

Indeed, the sale of half a ton of tusks on March 7, 2015 in France has shown that auction houses and intermediaries openly offer Asian customers the ability to reroute raw ivory through EU countries where export is still permitted. We are concerned that the increasing and poorly controlled export of alleged legal ivory from the EU is contributing to driving the insatiable demand for ivory and the largely illegal trade in China and other Asian countries.

It is contrary to the recognition by the EU and the international community that demand for ivory must urgently be reduced, in order to save the remaining elephant populations. Moreover, there are concerns that certificates issued by EU Member States are re-used in importing countries to launder ivory from poached elephants. For instance, tusks sold recently in France are intended to be transformed into carved ivory; these transformations prevent officials from verifying that the final articles correspond to the information on their certificates (weight and curve of the tusks, for example).

The EU has already issued guidelines banning the re-export of most rhino horns after recognizing its role in the increasing illegal trade and poaching. Similar measures are urgently needed for ivory.

Therefore, the 41 Non Governmental Organizations signatories to this letter urge you to suspend any export of raw ivory and to support a common EU position to this effect at the April 10th Committee meeting on Trade in Wild Fauna and Flora.

In February 2014, the European Union signed the London Declaration and pledged to take action to eradicate the supply and demand for illegal wildlife products. The upcoming ministerial conference on wildlife trafficking in Kasane, Botswana, will be a new opportunity for the international community to express its determination to fight against wildlife crime. Without a doubt the suspension of the exportation of all raw ivory from the EU is an urgently required and concrete action that will reduce trafficker’s room for maneuver and contribute to the protection of elephants.

We thank you for your support. 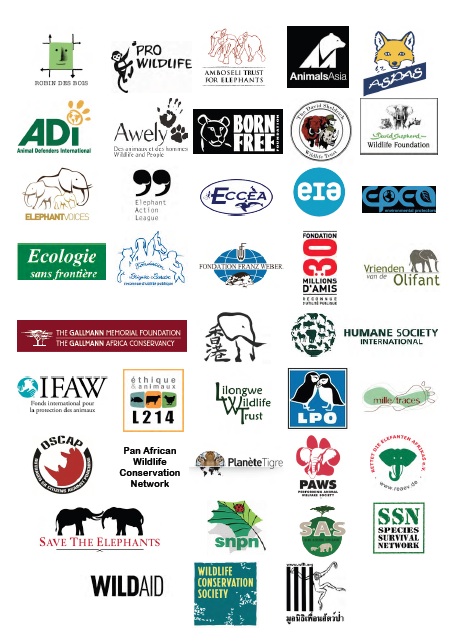