On The East African

The launch of an information sharing initiative in Tanzania to combat poaching (ed. WildLeaks) has put Kenya on the spot over its laxity in arresting suspected poaching kingpins.

Pressure is now piling on Nairobi to arrest Feizal Ali Mohammed, who has been linked with poaching and dealing in ivory.
In the same month, one of Africa’s last elephants was poisoned to death by poachers in Kenya after years of adapting his behaviour to hide from humans.
This and recovery of ivory in Mombasa exposed a much deeper problem that Kenya is facing in combating poaching and other wildlife crime in general.

Reports in public media suggest that cartels — similar to drug trafficking rings — are behind the poaching problem and that senior politicians and police officers are smack in the middle of these cartels, making it difficult to arrest the ringleaders.

The question is: How can Kenya stop these cartels? How can poaching and ivory trafficking be controlled?

In August, Andrea Crosta, an Italian former security consultant and longtime conservationist, was in Dar es Salaam to introduce his organisations new project that allows people to anonymously give information to enforcement authorities that can lead to the arrest and prosecution of wildlife crime ringleaders.

Projects such as WildLeaks could provide useful information about wildlife crime cartel leaders and may lead to their arrest. 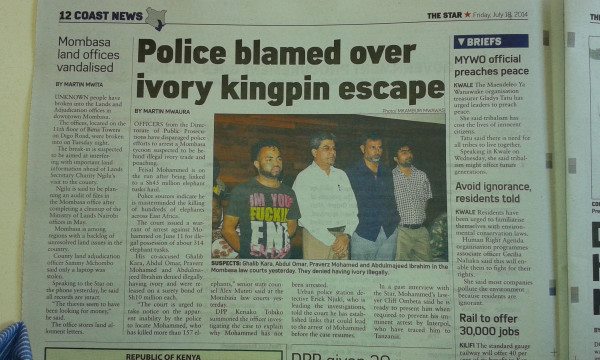