March 29, 2017, Washington, DC: Earth League International – ELI (formerly Elephant Action League), through its project WildLeaks, and the National Whistleblower Center (NWC), through its Global Wildlife Whistleblower Program, are thrilled to announce a collaboration that will enable wildlife whistleblowers around the world to safely and anonymously file wildlife crime reports, and help ensure that these courageous whistleblowers qualify for monetary rewards. Wildlife crimes very often go undetected and unchallenged when people do not feel they can speak up. WildLeaks’ innovative technology and ELI’s field presence, combined with NWC’s legal expertise, could fire up wildlife whistleblowers around the world.
Many U.S. wildlife laws, including the Lacey Act and the Endangered Species Act, direct certain federal agencies to pay monetary rewards to whistleblowers who disclose original information concerning wildlife crimes that result in successful enforcement actions. The rewards are available to U.S. citizens and non-citizens for reporting crimes both within the U.S. and globally. Unfortunately, to-date, federal agencies responsible for administering wildlife whistleblower protection laws have not taken adequate steps to publicize these laws or establish effective reporting procedures. 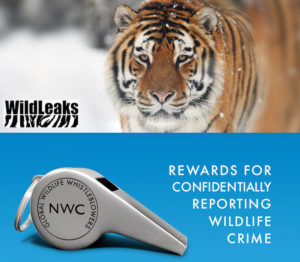 This is why the ELI/WildLeaks and NWC collaboration is so important to the fight against wildlife crime. Effectively publicizing the wildlife whistleblower laws already in place could trigger a massive increase in the detection of trafficking crimes. Stephen M. Kohn, NWC’s Executive Director, explained that “In other areas of the economy where whistleblower reward laws have been implemented they have been phenomenally successful, resulting in record civil and criminal recoveries. The evidence clearly supports a finding that, if implemented in the fight against wildlife crimes, the impact would be profound and revolutionary.”
NWC’s Global Wildlife Whistleblower Program is geared to educate potential wildlife whistleblowers, within the U.S. and internationally, of these laws the potential monetary rewards wildlife whistleblowers can receive for reporting crime.  The NWC is also utilizing the Foreign Corrupt Practices Act, which prohibits bribery of U.S.-related persons, as well as the False Claims Act, which prohibits lying on customs forms, to combat wildlife crime.

The WildLeaks Project, through its secure Tor-based online submission platform and its experts in wildlife crime, provides the well-needed avenue for wildlife whistleblowers to securely and anonymously report wildlife-related criminal activity from anywhere in the world. The NWC’s Program, which in addition to a secure communications platform also offers attorney-client privilege protections for potential whistleblowers, will accelerate the ability to use these powerful whistleblower reward laws to detect and successfully prosecute wildlife trafficking.

Andrea Crosta, Executive Director of Earth League International and Project Lead for WildLeaks, stated that, “The WildLeaks team is thrilled to be able to join forces with NWC. NWC’s extensive knowledge and experience around wildlife whistleblower laws and the federal agencies that administer them, along with the WildLeaks technology platform and ELI’s investigative activities in target countries, will be invaluable in the fight against wildlife and forest crime.”
Kohn, echoed Crosta’s sentiments, “Powerful whistleblower reward laws are an essential weapon in the war against wildlife trafficking. The NWC looks forward to representing Wildleaks and its associated wildlife whistleblowers. NWC receives wildlife crime reports from NGOs and Individuals, and then connects these informants to attorneys who can help submit their reports to U.S. authorities and apply for rewards under appropriate U.S. laws.  Together, we can reverse the extinction crisis.”
This collaboration is an outcome of ELI and WildLeaks’ strategic partnership development plan. Collaboration and partnership is crucial to ELI and WildLeaks’ missions – no single organization, entity, or individual has all the answers or all the resources needed to tackle the complex issue of wildlife crime.

About Earth League International and WildLeaks

Earth League International (ELI) is an innovative hybrid non-profit organization based in Los Angeles, California, that merges the worlds of high-level security, intelligence and conservation in service of wildlife and the people who protect it. Its mission is to protect wildlife through effective intelligence collection and investigative efforts. Web:   www.earthleagueinternational.org

WildLeaks is a not-for-profit collaborative project created, funded and managed by Earth League International (formerly Elephant Action League). The mission of WildLeaks is to receive and evaluate anonymous information and tips regarding wildlife and forest crimes and transform them into actionable operations. Web:   www.wildleaks.org

About the National Whistleblower Center
The NWC’s Global Wildlife Whistleblower Program provides a secure and completely confidential online platform where individuals across the world can report wildlife crime, and then connects whistleblowers to attorneys who can help submit their reports to U.S. authorities and apply for rewards under the appropriate U.S. law(s). NWC’s Global Wildlife Whistleblower Program won a Grand Prize in the 2016 Wildlife Crime Tech Challenge, an initiative of USAID in partnership with the National Geographic Society, the Smithsonian Institution, and TRAFFIC. The Program also received a significant grant from The Wildcat Foundation. To learn more about the Program, and how you can submit a report and connect with an attorney through NWC’s Wildlife Attorney Referral Service (ARS), please visit: www.whistleblowers.org/wildlife.