Huge achievement for the LA-based organization – by far the most important awareness and advocacy success in China on the issue of elephant poaching and ivory trafficking
April 18, 2017, Los Angeles, California: Elephant Action League (EAL) and the WildLeaks Project are so proud to announce that The Ivory Game has won in the Best International Feature Doc category at the Beijing Int. Film Festival 2017 (BJIFF).
This comes after a very successful China premiere at the National Library of Beijing followed by multiple screenings in cinemas around the city and a special screening at the US Embassy there.
The Ivory Game features the co-founder of EAL and the whistleblowing initiative WildLeaks, Mr. Andrea Crosta, among other protagonists, as it reveals the dark and complex world of the ivory supply chain.
This is another big win for EAL, and all those fighting to shut down the ivory trade, as Chinese attitudes toward ivory are changing and a total ban on ivory sales is now being implemented by the Chinese government.
Mr. Crosta, following a lead received through EAL’s Project WildLeaks, and a team of undercover investigators embarked on almost a year-long investigation in both China and Hong Kong in 2015, uncovering how legal businesses are involved in the laundering of ivory and other wildlife products. It is footage from this undercover investigation, along with investigative team interviews, that are featured in The Ivory Game film narrative, allowing viewers to experience the ivory trade in China first hand. 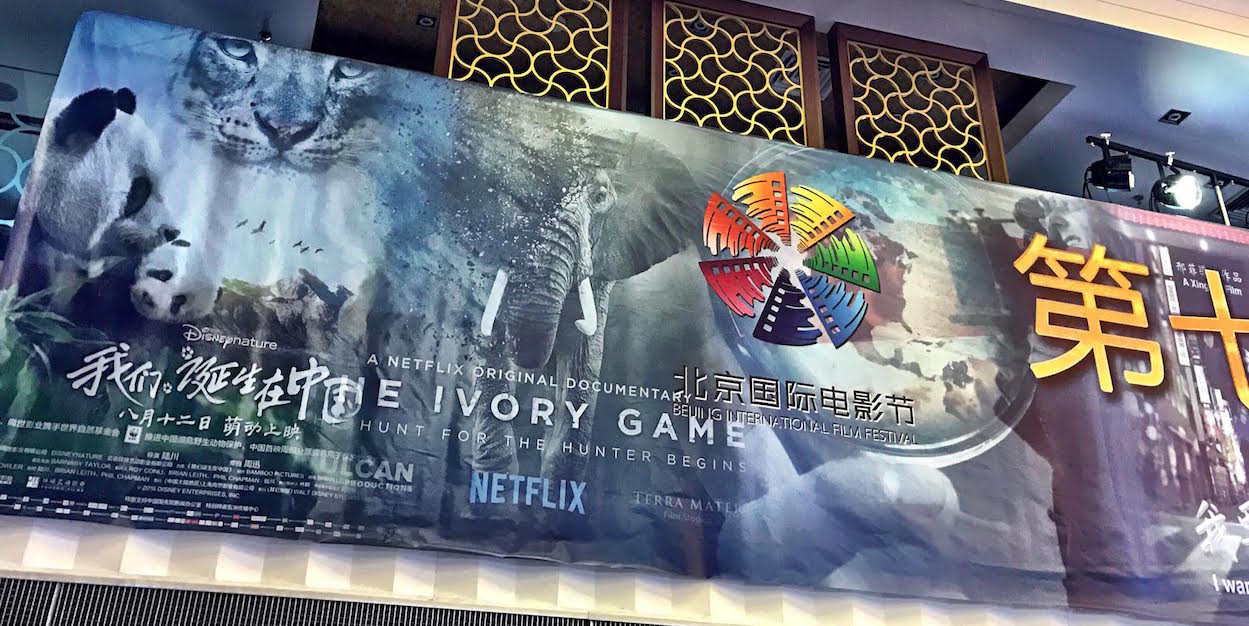 EAL originally published its powerful “Blending Ivory: China’s Old Loopholes, New Hopes” investigative report in January 2016, along with a confidential intelligence brief that was shared with Chinese and Hong Kong authorities. As the most recent full-scale investigation into China’s legal and illegal ivory trade, exposure of China’s legal trade system and legal businesses being exploited to launder illicit ivory onto the legal market helped put pressure on the Chinese government.
EAL would like to thank the organizers of BJIFF for allowing The Ivory Game to be a part of the festival, as well as the judges for bestowing such honor on the film. Mr. Crosta specifically would like to congratulate the organizers “for a courageous choice that shows that Chinese society and the Chinese media play such an important role in fighting wildlife trafficking and poaching worldwide.” He went on to say that, “we look forward to being involved in more films, documentaries, and projects that help China to be an active partner in protecting the planet.”
“The Ivory Game taking the top prize is a huge statement by the Chinese government, which is now aggressively moving forward to implement the ban on the ivory trade across the country,” states the film’s directors, Richard Ladkani and Kief Davidson, who are both attending the festival in Beijing.
EAL is currently managing over 10 investigative projects on three continents in its efforts to expose wildlife and forest crime. Given the importance of China in the wildlife trade, EAL continues to work with young Chinese nationals around the world to nurture a new generation of Chinese environmentalists.
The Ivory Game is available worldwide on Netflix. The Netflix Original was produced by Terra Mater and Vulcan Productions, in association with Malaika Pictures and Leonardo Di Caprio’s Appian Way. It premiered at the Telluride Film Festival and Toronto and was shortlisted in the best feature doc category for the Oscars 2017.

– END –
About Elephant Action League and WildLeaks
Elephant Action League (EAL) is an innovative hybrid non-profit organization based in Los Angeles, California, that merges the worlds of high-level security, intelligence and conservation in service of wildlife and the people who protect it. Its mission is protect wildlife, forests and oceans through effective intelligence collection and investigative efforts. www.earthleagueinternational.org

WildLeaks is a not-for-profit collaborative project created, funded and managed by the Elephant Action League (EAL) in collaboration with a small group of security and intelligence experts. The mission of WildLeaks is to receive and evaluate anonymous information and tips regarding wildlife and forest crimes and transform them into actionable operations. www.wildleaks.org