China Announces Full Ban on Ivory Trade by End of 2017

Largest ivory market to end processing and trade of ivory in a game-changing move to protect the world’s elephants
China’s state media reported on Friday, December 29, 2016, referencing a government statement that “China will gradually stop the processing and sales of ivories for commercial purposes by the end of 2017.”
China has the largest ivory market in the world, with some estimates suggesting 70% of the world’s ivory trade ends up there. African ivory is highly sought after in China where it is seen as a status symbol and prices can reach as much as $2,000 per kilogram. A surge in the killing of elephants over the past seven years has seen populations across Africa shrink by a one-third, according to the recently published Great Elephant Census.

China’s government plans to stop commercial processing and sale of ivory by March 31, 2017, with a phase out for the 34 registered processing entities and 143 registered traders through the remainder of 2017. A full halt of China’s domestic ivory market should then be complete by December 31, 2017. (See here for the translation of the official Chinese announcement)
China has been permitting the resale of ivory bought before the 1989 ban, as well as an ivory stockpile purchased with CITES approval in 2008. The government has been releasing approximately 5 tons of this stockpiled ivory annually for legal sale with certification. As Elephant Action League’s 2015 Blending Ivory investigation identified, though, China’s legal trade system and legal businesses are exploited to launder illicit ivory onto the legal market.
The Blending Ivory investigation was the most recent full-scale investigation into China’s legal and illegal ivory trade. The resulting report, along with extensive coverage of the investigation in the Netflix feature documentary The Ivory Game, released worldwide in November 2016, helped to put significant pressure on the Chinese government to quickly end its domestic ivory market.
In this powerful documentary, Elephant Action League Executive Director Andrea Crosta warns that the entire fate of Africa’s elephants is in the hands of a single man, Chinese President Xi Jinping. Only President Xi has the power, argues Crosta, to shut down China’s domestic ivory trade that drives so much of the killing of Africa’s rapidly diminishing elephant population. He used his power, eventually.
Although Hong Kong has also announced a full ban on its ivory market by 2021, this timeframe is too long and may offer a continuing market for both Hong Kong and Chinese traffickers to launder illegal ivory under cover of the legal ivory trade.
Another problem that must be addressed is China’s current ivory stockpiles. During EAL’s 2015 investigation in China, it was estimated is that there are at least 1,000 metric tons of illegal ivory hidden by ivory traders. This is in addition to the legal stockpiles held by the government. What will happen to these stockpiles? Will the illegal ivory market become completely “dark” and move underground, evolving to function again without the cover of the legal trade?
It can be predicted that the price of ivory will most likely fall over the next weeks and months, as Chinese traders start to dump large quantities of ivory on the market in an attempt to sell it before the full ban is in place. At the same time, it is extremely important for the international community to be alert to and prevent any dangerous spike in poaching in Africa. There is potential that poachers and traffickers will view the ban as the last chance to make significant sums of money, triggering an increase in poaching.
Even with the problems that may still perpetuate elephant poaching, China’s historic decision to end to the world’s primary legal ivory market is still a colossal boost to international efforts to tackle the elephant crisis.
Elephant Action League (EAL) would like to express its appreciation to Chinese leaders for this swift action and it is hoped that strategic efforts to address the illegal ivory market, to continue to reduce demand, and to help solve the elephant poaching crisis, will also be put in place. EAL also thanks the many organizations that have worked tirelessly to facilitate the closure of the ivory market worldwide.
It is hoped that the United Kingdom and the European Union follow suit.

Read here the translation of the official Chinese announcement. 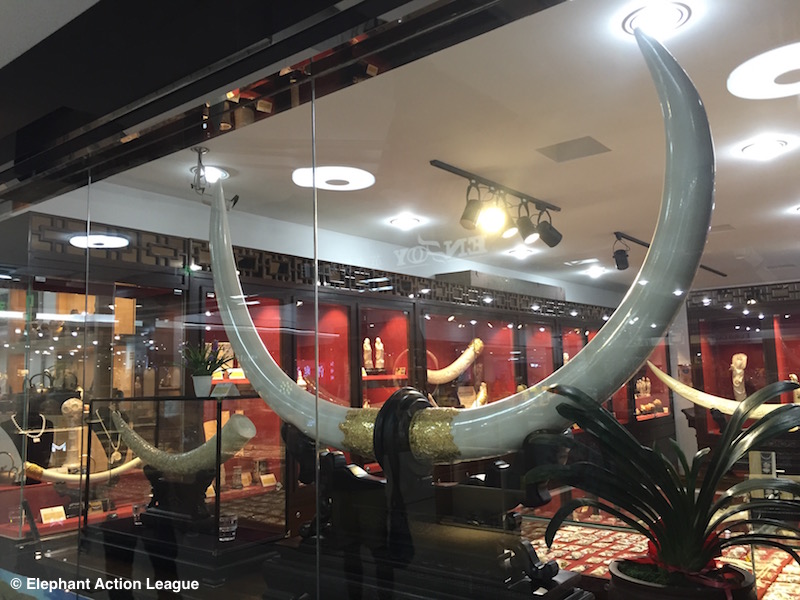