Washington, DC, December 30, 2015. EAL publishes today a report on its undercover investigation in mainland China and Hong Kong in an effort to expose the areas where illegal ivory opportunistically enters the legal ivory market, and where China’s legal trade system and legal businesses are exploited to launder illegal ivory onto the legal market. The investigation was performed over a 10-month period in 2015. EAL investigators conducted two field missions to Hong Kong and four field missions to mainland China using various stories to garner meetings with ivory traders and other industry insiders. The team made extensive use of undercover filming and set up a series of entities to legitimize these back-stories.

A few highlights from the report include:

“One of the major findings of this report is an apparently growing uneasiness among illegal ivory traffickers in China to continue with their business,” says Andrea Crosta, Executive Director of EAL. “There’s a huge quantity of illegal ivory in China, over 1,000 tons, and it’s unclear how to deal with it, but the traders are discussing, for the first time, the future of the ivory trade, both legal and illegal. There may be reason to have hope that the tide is finally turning in favor of elephants in Africa. Now it’s in the hands of President Xi Jinping ” he concludes.

Also of significance is an alarming amount of rhino horn that is apparently readily available in China; the EAL investigation team was offered rhino horn at every facility they visited. “The traders we spoke with claim that they can sell rhino horn as quickly as they can get their hands on it,” says Crosta. “Other wildlife products – tiger wine, tiger bone wine – are also readily available and easily obtainable.”

The undercover footage collected over the course of this investigation will be publicly shared following the premiere of the feature documentary ‘The Ivory Game’. The documentary, produced by Terra Mater Factual Studios and Microsoft Co-Founder Paul G. Allen’s Vulcan Productions, will reveal the fight against poachers and traffickers across Africa and Asia unlike any other documentary previously made. The film follows EAL’s investigation into the blending of China’s legal and illegal ivory markets.

In the picture: One of the rooms at Beijing Mammoth Art Co Ltd (credit: Elephant Action League) 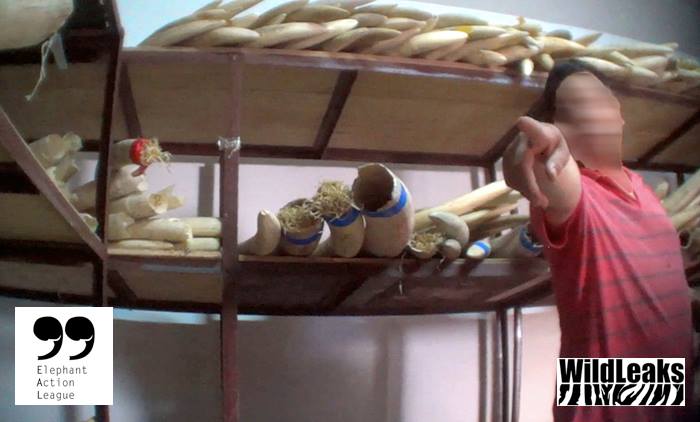