Pushing Ivory Out of Africa: A Case Study from the Field

This case study takes data directly from the field collected by Global Eye and Elephant Action League assets who infiltrated four elephant poaching and ivory trafficking networks in East Africa. What we found is in some respects at odds with the accepted law enforcement and conservation narratives assigned to ivory trafficking.

Washington DC, 20 July 2015 – In 2014-2015, the Elephant Action League (EAL) and Global Eye (GE) set out to identify and tackle the perceived shortcomings in how ivory trafficking is currently being addressed in East Africa. As we discuss in this case study, ivory trafficking is a complex problem, but we believe is a problem that can be significantly disrupted with the correct resources and a targeted application of effort.

Based on information collected during the course of this investigation, we argue that there are several components of elephant poaching and ivory trafficking not fully understood or encompassed by the existing approaches to stopping the problem, namely 1) that ivory is ‘pushed’ out of Africa as much as it is ‘pulled’ by overseas consumers and traffickers, 2) that networks operating in East Africa are not necessarily run by ‘kingpins’, and 3) that urban-based networks are unlikely to respond to existing programs designed for community-based natural resource management.

Mr. Fiachra Kearney, CEO of Global Eye explains, “this has been an extremely challenging and high-risk project, but we have achieved some tremendous outcomes. Apart from the information we have extracted from within ivory trafficking networks, we have demonstrated new angles of attack on these criminals.”

“Weak governance and widespread corruption continue to remain two huge obstacles to reigning in elephant poaching and ivory trafficking,” says Mr. Andrea Crosta, co-founder and Executive Director of the Elephant Action League. “These two obstacles often cancel out the substantial effort and millions of dollars spent in elephant protection by many governmental and non-governmental organizations.”

From the Case Study:

Based on information collected and intelligence analysis throughout the course of this investigation, three stark components of elephant poaching and ivory trafficking were identified:

African government officials and politicians often use the substantial demand for ivory from foreign countries and the purported role of Asian-based criminal networks as excuses to shed responsibility and accountability for the elephant poaching and ivory trafficking crisis in their countries. Our physical infiltration into the African component of the crisis confirms that African nationals play a crucial role in supplying ivory and facilitating the trafficking of ivory, and must be held accountable for their contribution to the crisis.

Weak governance and widespread corruption in African nations remain the two biggest obstacles to effectively slowing down elephant poaching and ivory trafficking. These two factors nullify both national and international good intentions and the millions of dollars invested in protecting elephants by both governmental and non-governmental organizations.

Broadening the anti-poaching and anti-trafficking conversations to include other important factors contributing to the crisis is also critically important. The diverse nature of African organized crime, trafficking syndicates, and the role of urban-based poaching/trafficking cells call for additional collaboration between law enforcement entities, at both the national and international levels.

From a law enforcement perspective, an effort must be made to avoid the over-emphasized assertions regarding the current (and past) understanding of elephant poaching and ivory trafficking models. Conservation models must also be nimble and highly adaptable in order to reach as many potential stakeholders as possible. Wherever possible, a collaborative approach should be utilized.

Illustration of routes and nodes used by the ‘Cerberus Network’ 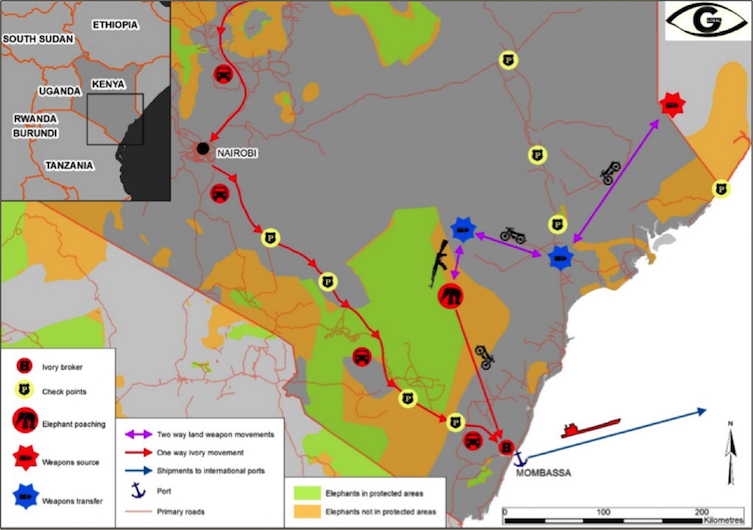 Elephant Action League (EAL) was founded in 2013 with a mission focused on fighting wildlife crime through concrete, innovative and collaborative projects. In 2014 EAL launched WildLeaks, the world’s first wildlife crime whistleblowers initiative. It is a registered nonprofit, tax-exempt charity under section 501(c)(3) of the U.S. Internal Revenue Code.