If You Buy Ivory, You Kill People.

Los Angeles, January 26, 2015— The Elephant Action League (EAL) today announced the launch of a new campaign to address the human toll of the global ivory trade in the coming year. EAL analysts are immediately available for interview or further commentary on the issue.

The human toll of the ivory trade is the negative impact on the individuals and communities exploited along the illegal ivory supply chain from Africa, to Asia, and points beyond. This trade is historically and inexorably linked to the exploitation and enslavement of vulnerable communities in Africa and Asia.

It includes governments sucked deeper into the morass of corruption, mismanagement, and taxpayer abuse wrought from public officials supporting criminal interests. It includes the lives affected by the introduction of other illegal activities that overlap with the ivory trade—including the trafficking of weapons, drugs and humans. It includes the countless orphans and widows left behind by wildlife rangers, poachers, and other law enforcement officials killed in the field. Finally, it has also led to increasing links between ivory trafficking and illegal armed groups in central and east Africa, affecting the peace and security of thousands of communities in the region.

To draw attention to this critically significant yet largely ignored aspect of the ivory trade, EAL is striking out in 2015 to implement a new public awareness campaign designed to expand the parameters of the traditional elephant conservation narrative.

Andrea Crosta, founder of Elephant Action League and WildLeaks, says: “Despite a growing number of communication and awareness campaigns launched in the past few years to reduce the demand for ivory, and given the scale of the problem, demand reduction initiatives have yet to demonstrate a significant behavioral change in ivory consumers in Asia, especially in China. Time is running out.”

Aaron Hall, an advisor to EAL and WildLeaks, says: “It’s critical heading into 2015 that new strategies emerge, combining innovative public awareness campaigns in Asia with increased law enforcement capacity in Africa, to start to make a dent in the negative human and environmental impacts of the global ivory trade. Efforts to stop the trade will have to occupy a unique space at the nexus of conservation, public policy, economics, peace and security, and human rights.”

Anyone buying or selling ivory today—whether an individual buying a bangle bracelet or a government that sanctions legal trade in ivory—is implicated as being directly responsible for these deaths and associated human suffering.

This new Human Toll Initiative by EAL seeks to hold consumers and governments accountable and in so doing, create another lever of pressure on individuals and governments to achieve a total ban of ivory sales the world over and close the legal market in China, the largest in existence.

As part of this new initiative, EAL will support students and researchers who would like to study the human toll of the ivory trade and would like to organize a symposium to be held in 2016 on this topic.

It’s vital that other NGOs of all types, as well as governmental organizations, academics, environmental activists, and key political and cultural leaders of every country, join EAL in this important and timely campaign to protect those people most vulnerable to the negative impacts of the ivory trade and bring the elephant back from the brink of extinction.

The message from EAL cannot be clearer, if you buy ivory, you kill people.

– The first poster of the campaign, below here (photos of Kate Brooks): https://earthleagueinternational.org/eals-campaign-human-toll-ivory-trade-poster

– Recent Al-Jazeera opinion piece on the need to address the Human Toll of the ivory trade (authors: Andrea Crosta and Aaron Hall): http://www.aljazeera.com/indepth/opinion/2015/01/ivory-trade-kills-people-20151865914791719.html

– Background on the EAL and the Human Toll of Ivory Campaign: https://earthleagueinternational.org/human-toll-wildlife-crime/ 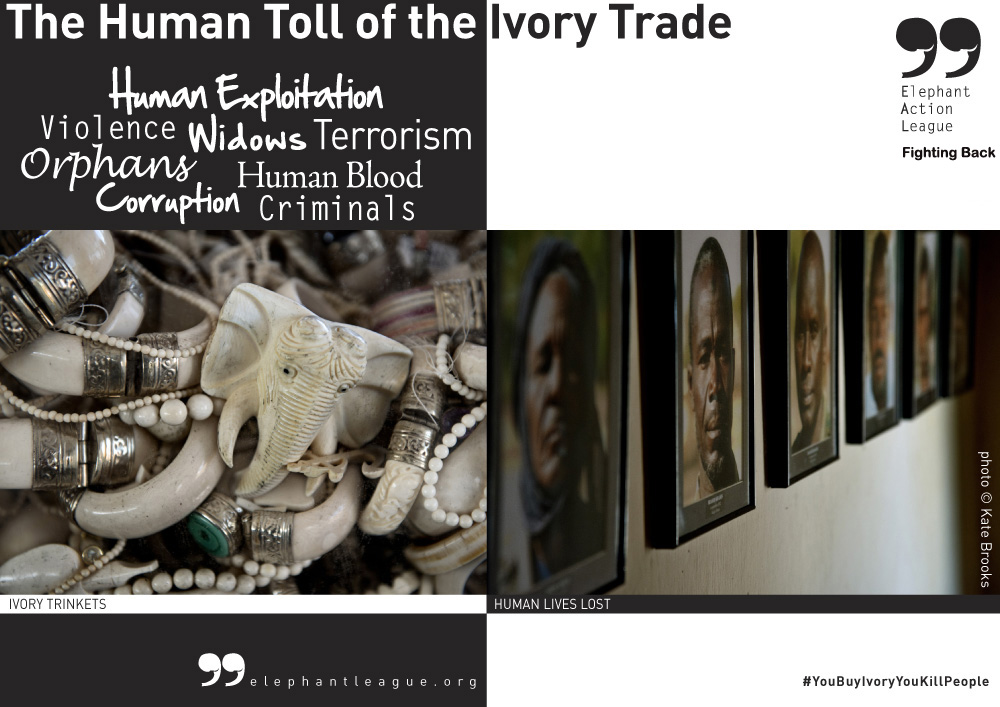