New study and analysis on ivory, terrorism & the LRA

Out Of Garamba, intO uGanda. Poaching and trade of ivory in Garamba National Park and LRA-affected areas in Congo.

By Kristof Titeca
Institute of Development Policy and Management (IOB), University of Antwerp

ABSTRACT
Ivory poaching and trading in central and eastern Africa has recently received a lot of attention. On the one hand, there have been a number of analyses highlighted how ‘tusks fund terror’ for the Lord’s Resistance Army (LRA). On the other hand, there have been a wide range of news reports on the confiscation of large consignments of ivory, in Entebbe airport, but particularly in Mombasa, all of which highlighting the intensified trade in ivory and the important (transit) role of Uganda. This analysis wants to better document both of these points, by linking them together: it wants to explain the poaching dynamics in Garamba National Park (GNP) in the DRC, where the LRA is active. It particularly wants to show how the LRA is a relatively minor actor in poaching – it can by far not explain the strong intensification of elephant poaching in the park: whereas from 2007 to 2012, 7 to 8 elephants were killed in the park, in the first 10 months of 2012 alone, a staggering 50 elephants were killed.
Related with this, the analysis wants to show how much of the ivory passing through Uganda, or confiscated in Mombasa, comes from GNP. Therefore, while calls from the UN Security Council to investigate the role of the LRA in ivory poaching are useful in bringing attention to the poaching problem, the strict attention to the LRA is not particularly helpful, and will only have a limited impact. 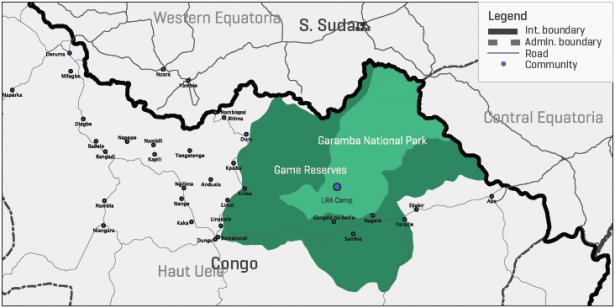