THE FIRST REPORT OF WILDLEAKS

September 8, 2020: Six years after the launch of the WildLeaks Project, Earth League International (ELI) is thrilled to release its first comprehensive report on this ground-breaking initiative. ELI realized, years ago, that the most crucial information about environmental/wildlife crime, and environmental crime in general, is in the hands of untapped sources working and living around the world, both inside and outside the criminal networks facilitating environmental/wildlife crime. So in response, ELI launched WildLeaks in 2014, a “safe space” online where anyone, whistleblowers around the world, can share this crucial information securely, anonymously, and with very limited personal risk 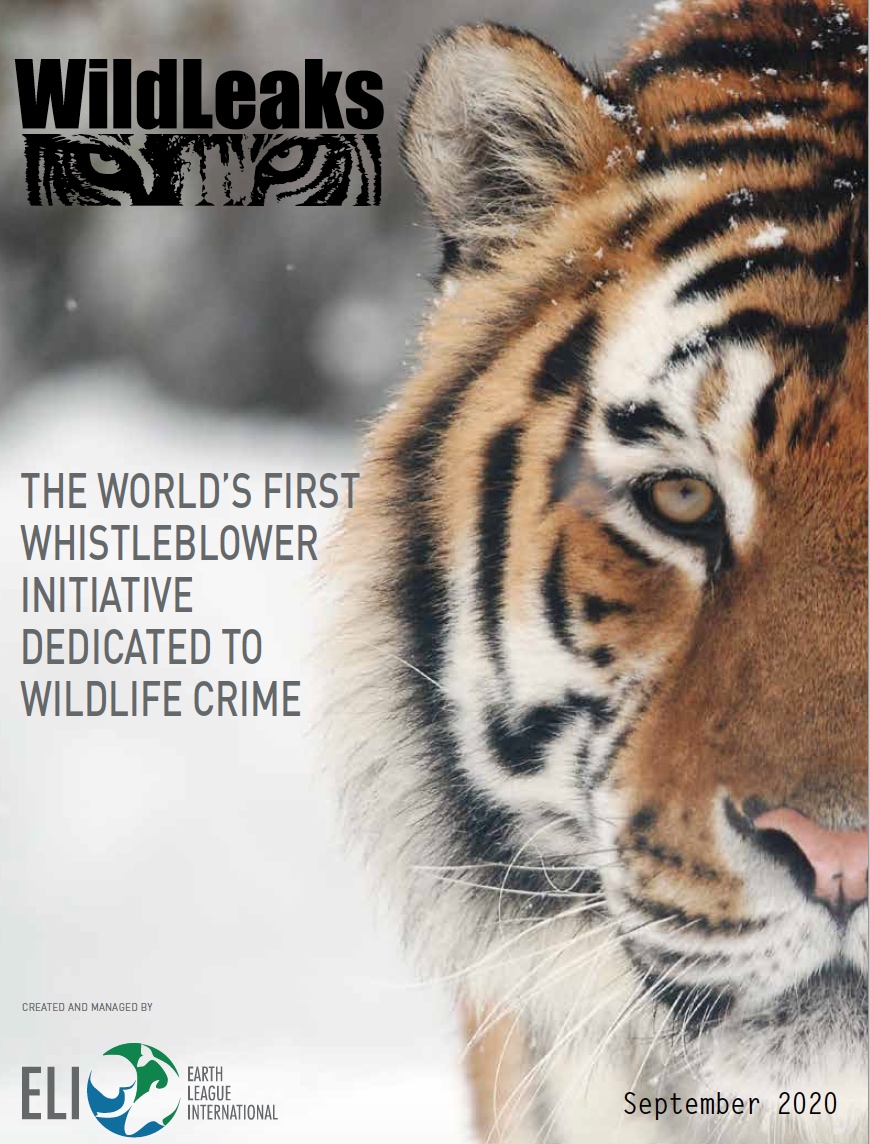 This report introduces the reader to whistleblowing in the context of environmental crime. More specifically, the reader is introduced to WildLeaks and the potential for whistleblowers to play a critical role in fighting back against environmental crime. The purpose of the report is to educate a global population about the potential of the WildLeaks platform, provide information on the submissions received to date, and identify possible actions that would allow ELI to enhance that potential.

The Earth League International recognized a needed avenue for people in the know to safely report wildlife crime. Operating in the field, ELI became aware that the volume of precious information about environmental crime is in the hands of people working and living around the world was huge, but largely untapped. Many of those people were not willing, or motivated, to share information for many reasons, but primarily out of fear for their own personal security, as well as a lack of trust in local authorities. Recognizing this enormous potential value, ELI, in collaboration with The Hermes Center for Transparency and Digital Rights and GlobaLeaks, began working on a way to facilitate the sharing and collection of sensitive information. The result is WildLeaks, a secure Tor-based online submission and data management system.

According to Mr. Crosta, the co-founder of ELI, “wildlife crime very often goes undetected and unchallenged because people do not or cannot speak up about it, so whistleblowers can play a crucial role in fighting back, creating awareness, and contributing to justice. So with this report, we hope to show the potential of WildLeaks and to recruit new partners to massively launch the project around the world.”

In 6 years of the WildLeaks Project, despite the lack of funding to properly advertise it, over 300 submissions have been received, of which roughly a quarter were assessed as interesting, a dozen instigated or contributed to investigations, and over 25 were reported to partner NGOs, law enforcement authorities, or media partners, or a combination thereof. WildLeaks has received information about environmental/wildlife crime from over 30 countries, including China, Hong Kong, South Africa, Zimbabwe, Nigeria, Mozambique, Kenya, Tanzania, Lebanon, India, Vietnam, Laos, Indonesia, the U.S., Mexico, Brazil, Finland and Russia.

Here are a just a few examples of WildLeaks submissions:

Whistleblowing through WildLeaks has grown organically into the important second pillar of ELI’s novel, three-pillar approach to combatting environmental crime and exploitation. Those pillars also include Intelligence & Analysis and Media Production & Public Outreach.

Mr. Crosta states that: “We grew this novel approach to conservation to address three of the most important facets of the war against environmental crime; to gather first-hand knowledge of the problem, empower people from around the world to share information on environmental crime, and inspire the public to action through current, strong narratives about environmental crime and exploitation.”