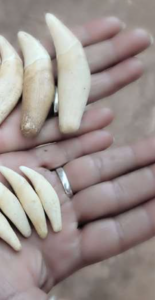 This conversation between an ELI’s undercover agent and a jaguar parts trafficker is just an excerpt from the hundreds of hours of audio and video recordings that the ELI’s teams collected between 2018 and 2020, in different regions of Bolivia, in partnership with IUCN Netherlands and IFAW (Operation Jaguar). This work sought to expose one of the least known links in the jaguar trafficking supply chain: the Asian communities that live in Latin America.

The ELI’s undercover operatives have been able to collect important information about these traffickers and their “modus operandi“, including how they operate and collaborate with each other, how they bribe government officials, and what routes they use to smuggle jaguar parts and other illegal wildlife products to Asia. “Jaguar trafficking is not just a conservation problem, but a criminal problem,” says Andrea Crosta, ELI’s director and co-founder.

A series of Confidential Intelligence Briefs (CIBs) have been prepared and shared with national and international law enforcement agencies.