Royal Thai Customs seizes 12.5 kg of rhino horn setting the stage for a ‘flash operation’ that has led to the arrest of a member of the Bach Family wildlife crime syndicate.
December 20, 2017, Los Angeles, California: Elephant Action League (EAL) is thrilled to announce the second successful joint operation with Royal Thai authorities that has resulted in the arrests of wildlife traffickers from the Bach Family Syndicate in Thailand. If it was not for Royal Thai Customs seizing 12.5 kg of rhino horn on December 12, 2017, this operation would not have taken place. This seizure offered an opportunity for EAL and Thai authorities to target a known trafficking network. 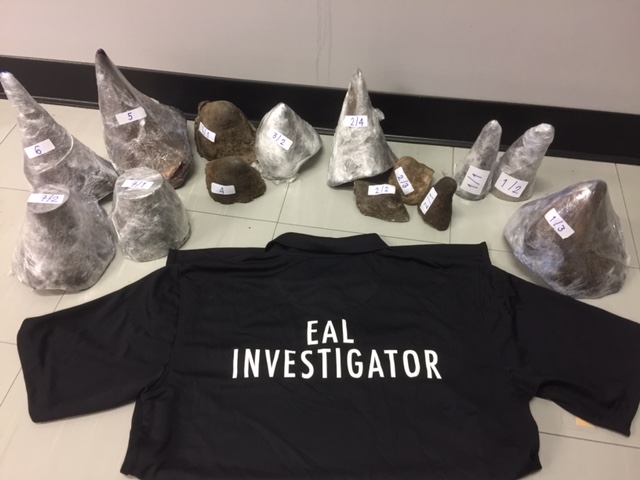 Royal Thai Customs seized rhino horn coming from South Africa and arrested a Chinese mule and a Thai national. Following the arrest, EAL’s intelligence team identified a connection between this shipment to the Bach Family trafficking network. EAL’s team then cooperated with the Royal Thai Customs and the Royal Thai Police in an operation that resulted in the arrest of Mr. Bach Van Hoa.

EAL’s director, Mr. Andrea Crosta, indicated that he “believes that this specific ring of traffickers that we took down is behind the smuggling of at least 56.5 kg of rhino horn from South Africa in the past four months.” The total value of this raw rhino horn on the wholesale black market in China is at least USD 2 million (before being processed, carved, or ground).

The Bach Family is a major trafficking syndicate let by two brothers and with operations in Thailand, Laos and Vietnam. In October 2016, the Bach brothers were the focus of this article in the Guardian Newspaper.

This article outlined some of the criminal associates of the Bach brothers, including the well known kingpin Vixay Keosavang and two unnamed South African criminals. In 2013, the US Government called the Keosavang syndicate one of the most prolific international wildlife trafficking syndicates and issued a US$1 million reward for information “leading to the dismantling” of the network.
According to Mr. Crosta, “The work is far from over as EAL and our partners will be working to fully disrupt these trafficking networks for many months – maybe even years.” These arrests are further proof that not only is it possible to perform good intelligence and investigative work in collaboration with experienced local authorities, but it is also possible to strike a blow to the criminal networks and kingpins that control and drive international wildlife trafficking.
These arrests and operations should have a ripple effect back to Africa and Indonesia, from where these wildlife criminal networks get their products, including rhino horn, ivory, pangolins and live animals like orangutans. Part of the work of EAL is to make the lives of the primary buyers and brokers of wildlife products much more difficult.
EAL would again like to thank Royal Thai Customs and the Royal Thai Police for their cooperation and support with this operation and looks forward to a continued partnership.

This is the second high-profile arrest in Thailand in less than a week that is a direct result of EAL’s operational support and guidance. On December 11, 2017, the wanted kingpin Kampanart Chaiyamart, belonging to one of the most significant wildlife syndicates in South East Asia, was arrested not far from Bangkok, and again thanks to the exceptional work of the Royal Thai Police along with the support of EAL’s Special Operations Division (SOD).

About Elephant Action League
Elephant Action League (EAL) is an innovative non-profit organization based in Los Angeles, California, that merges the worlds of high-level security, intelligence and conservation in service of wildlife and the people who protect it. Its mission is to protect wildlife, forests, and oceans through effective intelligence collection and investigative efforts.