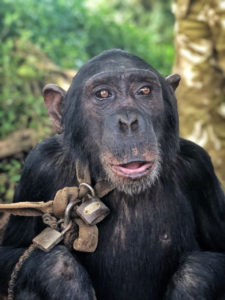 Operation Jane, named in honor of Dr. Jane Goodall, is one of Earth League International’s standing projects and our only non-investigative project. In collaboration with Annie Olivecrona, based in Kenya, Earth League International funds and operationally supports the identification and rescue of chimpanzee victims of wildlife crime being held captive across Africa. We provides support to those local rescuers working tirelessly, across Africa, to find and safely relocate chimpanzee victims to sanctuaries.

It is estimated that up to 3,000 live great apes are trafficked from Africa and Southeast Asia each year – either sold, killed during the hunt, or dying in captivity – and the trade is increasingly impacting wild populations. Chimpanzees comprise at least 64 percent of the trafficked great apes according to the UN Environmental Programme.

Poachers often kill entire families or social groups just to grab one or two cute infants, selling the slaughtered chimpanzees for bushmeat. The impact of this callous trade is catastrophic. It is thought that fewer than 300,000 chimps survive in the wild, where they face threats not only from poaching but also the loss of habitat and civil unrest; they have already been wiped out in four African countries.

When the cute chimpanzee infants grow into adult chimpanzees, several times stronger than humans and able to deliver savage bites, some captors pull out their teeth, amputate their thumbs to stop them climbing, or beat the chimps with metal bars to control behavior.

Funded by Earth League International, with the support of a few donors including Peace 4 Animals, our partner Annie Olivecrona was able to perform nine chimpanzees rescues in 2018 from the Central African Republic and South Sudan. Miriam, Victoria, John, Aimi, Annie, Commando, and three more beautiful chimpanzees, are now safe at a sanctuary in Zambia called Chimfunshi. 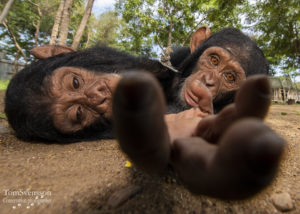